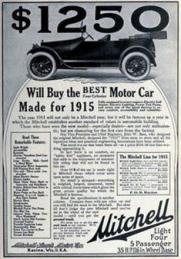 WINDHAM. FEBRUARY 12, 1915— “John W.M. Worledge has purchased a Mitchell automobile.” W.S. Harris, Exeter Newsletter. Well it was a regular car buying frenzy in Windham during the Winter of 1915, even without a President’s Day Sale. Mr. Worledge’s car was almost half the price of Mrs. Baker’s Cadillac. At that time, Mr. and Mrs. Worledge were operating Windham Cottage (More on that next week) on Great Boar’s Head at Hampton Beach. Having a car to travel back and forth from the coast, rather than taking a long, slow ride by horse and wagon, certainly would have been an advantage. John Worledge was Will Harris’ uncle and is pictured with his wife below.
Henry Mitchell was born in Scotland in 1810, and he moved to America in 1834. He and his wife Margaret settled in Fort Dearborn, which later became Chicago. Mitchell, a wheelwright, built the first wagon ever made in Chicago. Mitchell and his wife settled in Racine, Wis., in 1855. By 1877, the Mitchell & Lewis Co. was one of the largest and best-equipped wagon makers in the country.  The company had 7,200 employees and made more than 8,000 wagons a year. They were exported all over the world.
Henry Mitchell died in 1893. William Turnor Lewis, his son-in-law, took over the Mitchell company. His son, William Mitchell Lewis, or Uncle Bill as the family called him, started producing motorcycles. Six hundred Mitchell motorcycles were built in 1902. In 1903, the Mitchell Motor Car Co. built its first automobile. That was the same year as Henry Ford’s first car.  The company closed after building 86,966 cars and was liquidated in 1923. They even had their own sheet music tune: 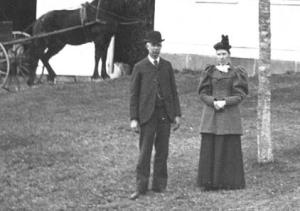