THREE: THE BEST MEMORIES OF TIME SPENT ON THE POND

“Spring, summer and fall were the best times. Even though they (Moe and Lucien Caron) liked having there personal space, they were very social and encouraged anyone who was around to go over on weekends for outdoor grilling, swimming and boating. Lucien made a rotisserie capable of roasting very large chunks of meat or you could grill up shish kebabs on 3 or 4 spits. There were also French fries. Moe had a restaurant style fry-o-later with two baskets. That thing made the best fries. Saturday evenings at the pond, as well as in Nashua during the winter, was for baked beans. The uncles liked their beer too and after I graduated from Keene State, I set them up with a refrigerated draft system. This way they could drink better beer at a better price. (there was a metal scotty dog bank left out where people could donate money anonymously for the beer they had drank.) It also was one more thing that made this place great.” 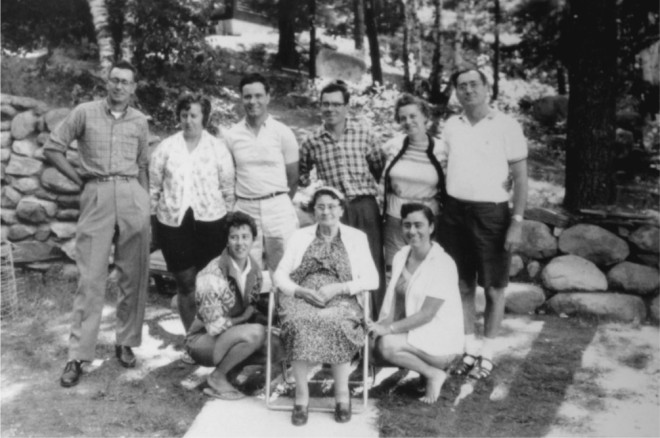 “My brothers and I were all boy scouts and one of the badges that was available was one called Mile Swim. It turns out that one lap around Rock Pond is a mile, so we all got our mile swim there; my uncles opened their place to anyone in our troop to come up for a day each year and swim for the badge. Uncle Lu made oak wood medals to hand out to those who made the swim.

“We had the coolest boats on the pond made from aircraft fuel drop tanks. The uncles built pontoon boats out of them. The paddle boat had a wooden deck sitting on two tanks. Standard folding chairs would fit into a channel that would keep them in place. A set of bicycle pedals were set up in front of the chairs with chains going below deck and another chain going to the back of the boat to a big paddle wheel. The rudder was operated by a lever control situated between the two chairs. The boat with the wood deck didn’t survive the years and those tanks eventually became floats for a dock.”

“The sailboat was all aluminum and still survives today. It had a sunken deck between the pontoons and a very large sail mounted at the front of the upper deck. The boat was heavy, stable and very fast on a windy day. Many people had manged to get a little bit of water to come over the deck but it was generally agreed that it could not be flipped over. I put an end to that when I was out there by myself one day. I got a good strong gust heading into a turn. I held the rudder tight into the turn, let out the sail and quickly pulled it back in as the turn was nearly completed. The front right side was dipping below the water and then the boat started to dive head first. It then flipped sideways and then upside-down.  I was fully clothed and nearly lost my glasses as I swam to the surface. About three row boats from around the pond came out to help. We had to unhook the mast while out in deep water so we could haul the boat close enough to shore. We were then able to flip the boat right side up and tow it back to Moe’s. We put the mast back on and it was ready for another day.”

“With all the fun things to do at Rock Pond, it was mostly fun because of my uncles. All the things were still there when they died but it just wasn’t the same any more. Fewer people came by and the family was spreading out around the country. One nephew moved to London for work. There were long stretches of no one going there at all. Eventually, it became clear that we just couldn’t sustain the vitality that once was. We still have our memories of the best times of our lives though. That lives on.” Thanks again to Bob Caron for the memories. This series on Rock Pond is almost over. Do you have old photos and stories to share? E-mail them to me.