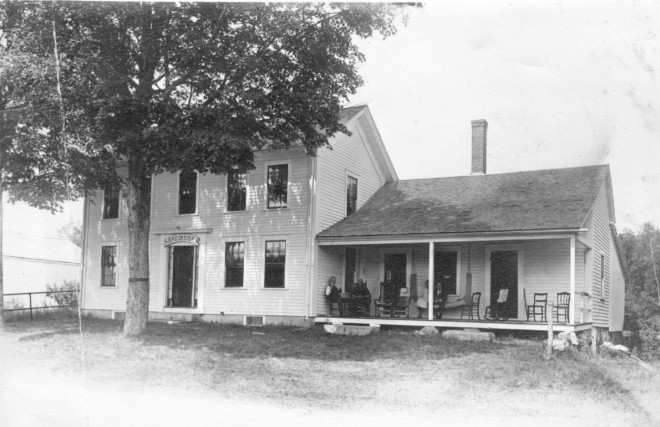 A very nice couple stopped by to see me, in order to ask about a farm in Windham that their family once owned. They allowed me to make copies of their photographs so I could try to determine the location of the farm.  The “Brookside” sign over the door and noted on a photograph solved the mystery. This is a beautiful photograph of what people now know as the “Fellows” house, which once stood at the corner of North Lowell Road and Route 111, and was torn down a few years ago. Sadly, I misplaced the notes I took about the photographs. I am not sure whether the people in the photographs are Lang Family or the Knowlton Family. Walter and Carolyn Lang bought the property from George Seavey in 1904 for 3,200 dollars. The property was left to their heirs, Walter W. Lang , Elmer Lang and George Lang of Boston, John Lang of Saugus and Harold Lang of Pittsburg, PA. Perley G. and H. Elizabeth Knowlton purchased the property from them  in 1936, subsequently selling to the Fellows in 1946. One of the photographs in the group is a cyanotype (blue) and all the Cyanotype photographs in Windham that I’ve seen were taken about 1910. So my best guess is that the folks in the photographs are the Langs.  What is certain is that these people really enjoyed that porch, overlooking their rolling fields and Collins Brook.