Windham Deserters in the Civil War 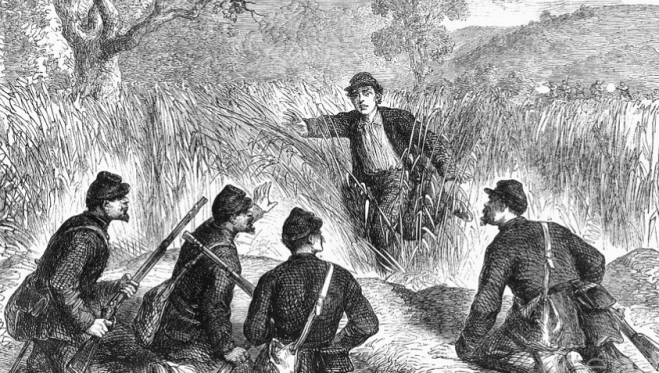 As somebody who has never donned the uniform or faced the fire of an enemy in battle, I make no judgment one way or another about the large number of deserters among the rolls of Windham men who fought in the Civil War. However, the number of deserters in Morrison’s History of Windham was quite astonishing to me. This led me to want to find out more about desertion during the War of Rebellion.

Come to find out, the problem of desertion was widespread among both the southern and northern troops.  Mark A. Weitz in Desertion, Cowardice and Punishment says, “…the two sides put about three million men in the field during the course of the four-year conflict. Historians concede that exact numbers are unattainable, but estimates of total Confederates under arms is between 800,000 and 1,200,000. The Union army is estimated to have been slightly over 2 million men. Drawn from every corner of America, both armies were overwhelmingly volunteer forces comprised of men unfamiliar with war and the rigors of military life. Thus, in addition to the logistical challenges of training and equipping these armies, military and civilian officials faced the challenge of keeping the army intact, and throughout the war desertion posed a problem for both sides.”

“Defined as leaving the military with the intent not to return, desertion differs from cowardice. Cowardice in the civil war was defined as deserting in the face of the enemy. While deserters numbered in the hundreds of thousands, deserting in the face of the enemy was far less common a crime, or at least not as prominent in the records that survive…To be sure, the image of Henry Fleming fleeing the battlefield in Stephen Crane’s Red Badge of Courage, had its basis in historical fact and undoubtedly occurred …Desertion proved a far more difficult problem for both sides. Official figures show slightly over 103,000 Confederate soldiers and over 200,000

Union soldiers deserted, with some estimates as high as 280,000… Men deserted for a variety of reasons, many of which were common to both sides. The rigors or military life, poor food, inadequate clothing, homesickness, and concern for loved ones at home all drove men to desert… Many soldiers saw their enlistment as contractual in nature and any perception that the government was not living up to its end of the bargain justified their departure. This reliance on the government’s promise as a reason to desert would prove particularly troublesome for the Confederacy where soldiers believed their commitment to fight was based in part on the promise that their families would be taken care of in their absence.

“…Desertion from the Union army began early in the war and continued to some degree throughout the conflict. Early enlistments were for three months, and volunteers flocked to the cause believing the rebellion would be suppressed in short order. When it became clear that subduing the Confederacy would be a much more arduous task, particularly in light of Union defeats in July, August, and October of 1861, the patriotic fervor that drove enlistment in the first months of the war began to wane and with it the commitment of some men to the cause. However, one aspect of enlistment unique to the Union army clearly contributed to desertion and appealed to men who never intended to remain in the service. The Union paid bounties, or enlistment bonuses for new recruits, often as much as $300.00. Men enlisted, collected their bounty, and then deserted. Thereafter, a deserter re-enlisted under a different name and at a different place, collected another bounty, and then deserted again. The Union Army paid privates an average salary of $13 per month. A $300 bounty amounted to almost twice a private’s annual salary and a man willing to test the bounty system