Had Kin in Every U.S. War 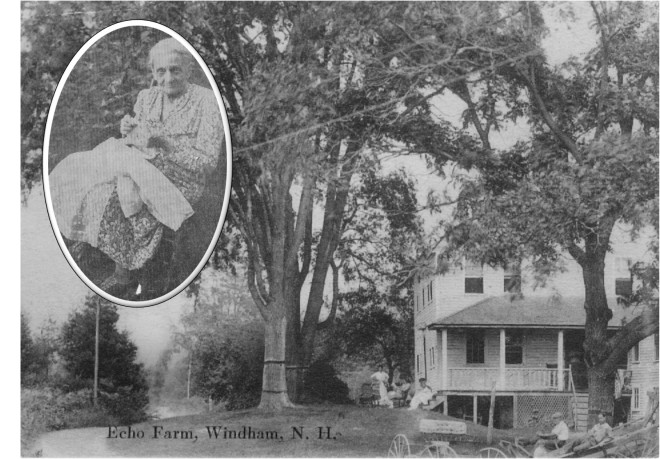 Mrs. Gilson is shown above knitting for the Red Cross during World War II. She and her husband purchased the J.C. Armstrong farm in 1898. It is pictured above and below and was located on Haverhill Road between the Center and West Windham. She was the librarian at Nesmith Library from 1922 until 1943. She was born in 1869 and died in 1950.

Manchester Union Leader:  “Windham, July 27.— A remarkable family war record—dating back to the Revolution— is possessed by Mrs. Henry Y. Gilson of this 200-year-old town. Relatives have taken part in practically every war in which this country has been engaged since its birth, a fact of which she is duly proud but quite modest.”

“Two great, great grandfathers of Mrs. Gilson participated in the famed Boston tea party. They were Joseph Shed and William Wheeler, both of whom are buried in Tomb 69, Granary burying ground, near Park Street church, Boston, in the same cemetery with Paul Revere. Some of the colonist masquerading as Indians for this party changed their clothes in the general store of Mr. Shed in Boston. Two other great, great grandfathers served as captains in the war with Britain, Caleb Kimball and Samuel Carr.”

“Lorenzo B, Kimball, father of Mrs. Gilson served in the Civil war, along with two of her uncles, William H. Shed, who died a war prisoner, and Henry Fargo. The local woman’s husband, who died six years ago, was a first lieutenant in the Spanish-American War, Two of his brothers, and a brother-in-law, also took part in that conflict, besides several cousins. The trio were Howard A. Gilson, now in Chelsea, Mass., veteran’s hospital, recovering from a major operation; Valentine E. Gilson, who later served as a color guard for a Connecticut governor, and died two years ago; and Louis Winchenbach of Lexington Mass. “

“A son of Mrs. Gilson, Henry E. Gilson of Sunapee, was a fireman in the U.S. Navy in the First World War, and is now endeavoring to enlist in this war. A son-in-law, Paul B. Evans of Windham, also saw service in the European battle, enlisting at the age of 18. A nephew of Mrs. Gilson, Frederick F. Harmon, a brigade runner, was killed in the Argonne engagement.”

“A grandson Paul G. Evans, 19, enlisted in the U.S. Navy last January and is stationed at Boston as a second class seaman. Another grandson, Robert W. Evans, has tried twice to enlist in the Navy, but was rejected because of a slight ear ailment. He has been taking regular treatment, however, and when he made his second try last Thursday was told to come back a week later and there would be no doubt about his acceptance.”

“Mrs. Gilson is also doing her part in civilian defense activities. She serves at the local report center two afternoons weekly and does knitting for the Red Cross. She has been the librarian of the Nesmith Public Library for 20 years.”

She has belonged to the Molly Reid chapter D.A.R., of Derry for more than 25 years, and is past president of the Windham Woman’s club. She is a trustee of the Windham Presbyterian church and holds membership in Windham grange and Mizpah lodge of Derry.”