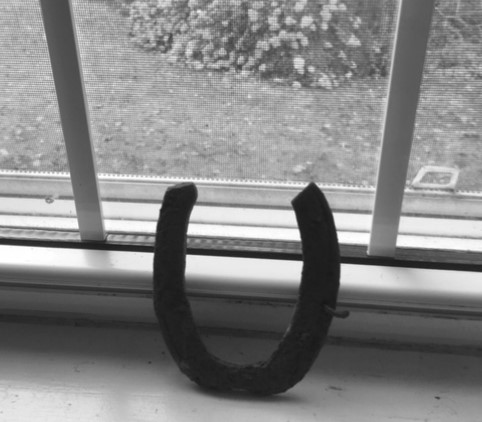 Maura Dionne’s horseshoe found in her yard in Windham.

So, for all of you folks who think that all of this business about fairies and other supernatural occurrences is nonsense and superstition, listen up. I had a nice note from Maura Dionne who lives near Haskell Pond, right here in Windham. She was in her yard planting spring bulbs. As she turned the soil and dug the holes her shovel hit something metallic, so she continued to dig it up. To her surprise, she found a horseshoe buried there.  While that doesn’t rise to the level of a supernatural occurrence, what happened next does. After she finished planting her bulbs, she went to collect her mail. Maura is not a regular subscriber to the Windham News, she normally reads it in the library. That very day she received a complimentary copy in the mail. She relates that, “as I walked to my mailbox intrigued by my find – I coincidently opened up the Windham Independent to your article.” It was the very issue in which my column discussed the tradition of lucky horseshoes.  The physicists tell us that most of the entire universe that surrounds us is empty space, and that there are multiple universes on which we can possibly travel. If that is true, the visualization of a lucky horse shoe, sent out into the multiverses, could certainly materialize, in a yard in Windham! Just a coincidence or the luck of the Irish?

As most of you know, the settlers of these parts of New Hampshire were the Scotch-Irish. Even today, in Northern Ireland, the belief in fairies runs strong. We learn on FolkloreThurday.com in January of this year that the BBC, in 1952, ran a series about “Northern Ireland’s fascination with the wee folk.”

“Only a few months ago we heard the Independent TD Danny Healy-Rae claiming that the dip in the motorway located in Kerry existed due to the presence of fairy forts disturbing the area.[1] Fairies were frequently blamed in Irish culture for events out of the ordinary or scenarios that were difficult to explain. An interest, curiosity, and belief in the fairies also holds an association with Irish cultural identity. Fairy belief is certainly associated with place and the natural environment. Jane Talbot cites her fascination of tree lore as the inspiration for her book ‘The Faerie Thorn and Other Stories’, basing this on the local fairy thorn tree on the farm where she lives with her husband in Ballymoney.[2] The MAC theatre in Belfast even decided to showcase a play based on Talbot’s book of stories on fairy lore. You may find it curious then that 2017 has actually much in common with the year of 1952. Of course, we have the Irish Folklore Commission collecting oral testimony and the British Broadcasting Corporation dedicated time to the collection of fairy lore in Northern Ireland, leading to a five-part series titled Fairy Faith in 1952.” 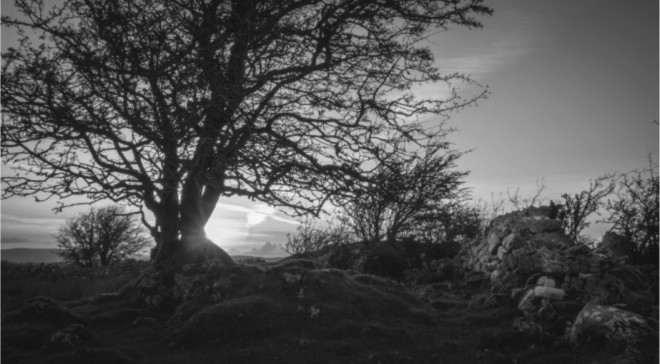 A Fairy Thorn tree along a hedge-row in Northern Ireland.

A Fairy Thorn tree in Ballymoney led a local woman to write a book about fairies? That’s interesting! The Dinsmores, lived in Ballymoney and most of the Scotch-Irish, who migrated to America in 1718 lived thereabouts. Did the legend of Tseinetto the fairy originate with the Scotch-Irish in Derry? The BBC program Fairy Faith salvaged the oral testimony of fairy belief surviving in Northern Ireland in the late 1940s and early 1950s. The program’s producer, Sam Hanna Bell, and folklorist, Michael J Murphy, recorded local people recalling their stories of fairy belief.[3] Murphy was the ethnographer who searched for first person testimonials across Northern Ireland and then Bell recorded these afterwards without interfering with scripting and re-recording the participants’ stories. They drew inspiration from the rural areas tracing folk stories and folklife.” So if the BBC felt it important to record for posterity, the fairy beliefs of Northern Ireland, there must have been very heart felt belief or folk memory among the residents there.

In a 2015 story, the BBC reported on the fairy tree in Annacloy, Northern Ireland. “When civil engineers removed a thorn tree blocking a new road between Downpatrick and Ballynahinch, it caused consternation among the residents of Annacloy who believed it to be the home of fairies. In our archive report from 1964, locals talk about the fate that will befall those who have disrespected fairy traditions.” You can find the link to this BBC interview from 1964 on my blog.

So what exactly is a fairy thorn tree? The site remarkabletrees.org states that, “Throughout the Northern Ireland countryside, there is a special tree – not one tree, but many, – standing alone, unharmed through generations, guarding its special place. It is the Fairy Thorn. Most are hawthorn, the white thorn with its May blossom… Fairy thorns may be associated with archaeological sites, such as the Neolithic chambered graves and wedge tombs. They may stand beside wells and springs, places known to early man and sometimes adopted by Christianity as Church sites or Holy Wells. In some rural sites there may be no apparent built artefact beside a fairy thorn, but the tree may guard a small rise in the ground – a fairy hill, place of entry to the under or other world of the fairy folk…Such special trees have a remarkable power about them. A gnarled thorn, often growing in harsh rocky ground, survivor of wind, weather, grazing, and many generations of man, has its own special strength. Stories still abound of misfortunes visited on those who risked disturbing such trees.”