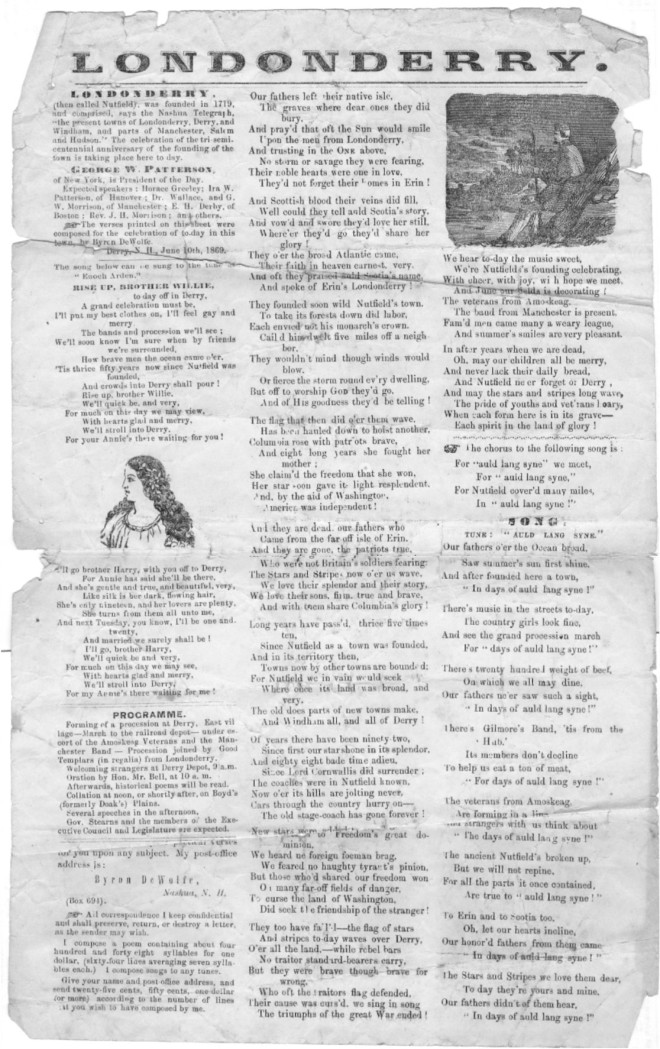 The program above for the 1869 Celebration of Nutfield. “Londonderry, (then called Nutfield), was founded in 1719, and comprised, ‘the present towns of Londonderry, Derry, and Windham, and parts of Manchester, Salem and Hudson.’

One of the speakers that day was Horace Greeley, who was an American author, statesman, and the founder-editor of the New York Tribune. On that day, he was introduced as having “…sprung from Londonderry stock, and widely known and honored.” Some excerpts from his speech give a flavor of the American ideals of 1869. The celebration took place just four short years after the Civil War. “…I trust we shall cordially agree to the devote the memory of the festival to the memory of that Scotch-Irish race who first settled the town of Londonderry, and gave it the character it still proudly maintains…” The Scotch-Irish were eminently men of conviction. They saw clearly; they reasoned fearlessly; and they did not hesitate to follow wherever truth led the way. Migration to Ireland cracked the shell of their insular prejudice; removal thence to America completed their emancipation. Liberalized by crossing the strait, the passage of a stormy ocean made them freemen.”

The Scotch, whether at home or abroad, were an intellectual, an inquiring, and Bible-reading people. Whether Bible-reading made them such early zealous Protestants, or Protestantism opened to them the Bible, they have been eminently familiar with the Good Book for three centuries. Their knowledge of its contents kindled and has kept alive in their breasts the sacred fire of Liberty…”

“Hence their early and steadfast devotion to Common Schools. Their Christianity and their love of Liberty alike impelled them to educate their children, including those of the humblest and least esteemed. A meeting-house was the first building not of logs erected in this township; but a school-house soon followed; and the children of Londonderry have ever been blest with excellent common schools. And the good they enjoyed they were eager to impart and diffuse. I presume that more teachers now living trace their descent from the Scotch-Irish pioneers of Londonderry than to an equal number anywhere else. New England is to-day teaching our country. If you should visit all the school-houses in California you would find two-thirds of them under the sway of teachers from New England, and a sixth of these tracing their lineage to Londonderry, whose early devotion to the Bible and to common schools is still cherished by her children.”

“In New York we feel, as in Londonderry you do not, the pressure of the Old-World prelacy in determined, though as yet quiet, efforts to break up our common schools into theological fragments, each under the control of the hierarchy of some sect or denomination. I deprecate the change thus sought as perilous, if not fatal, to republican institutions. When the time shall have come for apportioning our children to Catholic, Orthodox, Liberal, Baptist, Methodist and Unitarian primary schools, I shall apprehend that the last sands of the Republic are nearly run. When our common schools shall have perished we may still have a country; but it will not be the land of Liberty and Equality for which our fathers toiled and suffered, and poured out their blood.”

Let me not seem to speak as one filled with apprehension. Despite its trials and perils, the Republic will live and not die. It has cost too much — it is worth too much — to be tamely surrendered. In one of the many dark hours of our late and terrible struggle, a doubting friend asked me, ‘Do you not consider Popular Rule about played out here?’ ‘No,’ I replied. ‘We have Common Schools and Trial by Jury left, and we can afford to fight fifty years longer rather than give them up.”

“Burke said the chief end of government was twelve honest, intelligent men in the jury-box to decide all contested issues. In the same spirit I hold that, so long as we can maintain common schools free to all children, and be tolerably sure of twelve fair men in the jury-box when issues of fact are to be tried, so long will our country remain a lighthouse to the nations and a star of hope to the oppressed throughout the world. And so long, I trust, will our people gather on anniversaries like this, to honor the virtues of their ancestors and hand down the fame of their grand achievements to their latest posterity.” With recent calls to tear down even the statues of Jefferson and Washington, in order to erase their memory from the national consciousness, Greeley’s hope may soon be extinguished.