William Meserve’s Automobile is pictured above. It was built right here in Windham in 1895. He experimented with gasoline, electric and steam power. The Horseless Age is a fascinating early magazine from the pioneering days of automobiles and can be read online. W.F. Meserve’s advertisement from the September 26, 1900 issue

Throughout his life he maintained an active interest in electricity and its many developments, and was often called upon to make his knowledge serve practical purposes. In 1898, at a time when many big cities had not yet adopted the use of electric lights, the neighboring town of Salem installed them. It was to him that the new company turned when it was ready to start its plant, for he was the only one who could be found with sufficient knowledge to handle the monster safely. He foresaw many of electricity’s present applications many years before they became a reality. Among my earliest recollections is his talking about electrifying the railroads. He often spoke of it at home, although he would have received nothing but ridicule had he been so bold as to try to develop that idea at the time it originated within his mind. It was a great satisfaction to him when, years later, railroad electrification became an established fact.”

“On October 10, 1893 he married my mother, Abbie Chase, who had been his sister’s roommate at Pinkerton Academy in Derry. She had always the most genuine interest in his various undertakings. It is fortunate for her family that she kept a diary during the following years, for otherwise there are many things concerning out father’s accomplishments that we might never have known.”

“About that time he began reading of the wonderful new carriages that could go without horses. Nearly everyone he knew scoffed at such ‘fanciful’ stories. No one in his section of the country had ever seen one. It would be hard to say where the nearest one might be found. But the idea fascinated him, for it was indeed the fulfillment of his boyhood dreams. As a child he had lived near the railroad, and used to enjoy watching the trains come and go. His ever fertile brain, even at that early age, foresaw the possibility of wagons going likewise under their own power, and often did he ponder it. This was typical of him throughout his life. He was forever seeing possibilities for creation or improvement in any field in which circumstances placed him.”

“He snatched at everything he could find in print regarding the latest development, and in 1895 determined that he would make one for himself. He bought a Concord buggy, and cut down the wheels considerably . He conceived the idea of using was then termed ‘hose pipe’ tires, instead of the solid ones commonly used on wagons. He asked a well known bicycle tire manufacturer to make him a set patterned after bicycle tires, specifying the size – I think they were three inch. They agreed to try this experiment if he would give an order for two sets, which he did. These were among the first pneumatic automobile tires ever to be made. It marked a new era for this company, which is still prominent in the tire industry. An automobile engine was not obtainable, so he ordered a two cylinder gasoline boat engine. On July 21, 1896 Mother entered in her diary, ‘Went to the Post Office this morning and found Will’s engine had arrived. He and Charles went for it this noon.’ From then on throughout summer there were frequent references to the ‘carriage’ on which ‘Will’ was working. Almost any hour of the day or night, when he could get away from business (for all this was in his spare time) he might be found working in the little shop which he carefully equipped. (It is still standing on the side of Route 28 in Windham. BRD) Passing neighbors would place their hands over their mouths to hide smiles of ridicule as they watched him tinker with the metals and pipes, water, steam, gasoline and electricity — only he knowing that in them lay the power that today has given America a great and fruitful industry.”

“On September 22, 1896 Mother wrote, ‘Took carriage out and tried to start it this evening.’ Apparently it was not wholly successful, for there are subsequently many recordings of changes to the motor and of trying various combinations until he finally succeeded in making it do his bidding. What a thrill it must have been when at last he was able to drive out under its own power! Great was the excitement when first he drove his new creation down the turnpike. Skeptical neighbors and friends, who had smiled at his efforts, stood watching with mouths wide open and eyes popping out of their heads. For a number of years it was the only ‘horseless carriage’ or ‘motor wagon’ (as Mother variously recorded) anywhere in their section, and it created a great sensation wherever it went – especially in the cities. People would want to climb all over it, and particularly to look under it. On May 1, 1897 Mother wrote, ‘Will worked some on his wagon; rode out to Canobie and back in it.’ Throughout the next few years there were many recordings of trips to neighboring towns and cities. It wandered as far away as Boston, and even farther in other directions. His ‘carriage’ grew to be a familiar site for miles around, and people never ceased to marvel at it or to storm angrily about it. It served him well for four years, during which time he changed its power from gasoline to electricity, and finally to steam in an effort to discover the best means of motivity. ‘The Horseless Age; a leading automobile journal of that day, in its issue of September 26, 1900, carried and advertisement for its sale. We have proof that ten years after it was built it was still travelling New Hampshire’s highways, for its registration may be found in the book of ‘New Hampshire Automobile Law – With Registration to February 1905.” 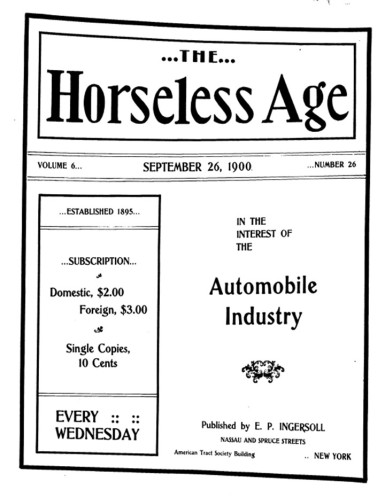 The Horseless Age Online at: https://catalog.hathitrust.org/Record/000543204