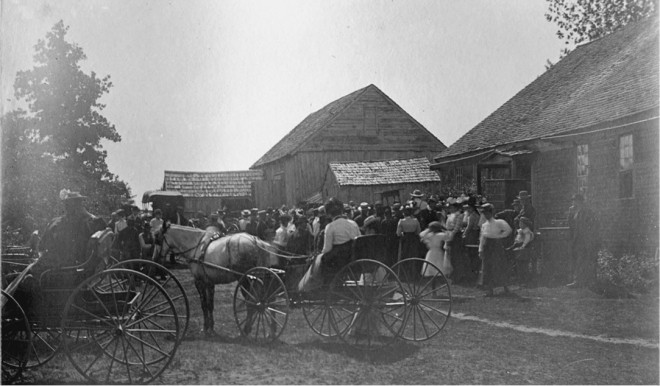 From the Logbook of William Austin Brooks

August 3, 1900 from the William Austin Brooks Diary: “In the afternoon we went to the auction at the old Merrill house. We arrived at 2 o’clock and found the sale in progress. Teams were hitched to the fence and trees along both sides of the road and about the house. The house itself is an ancient New England farm house, weather beaten and gray with over one hundred years. Outside in the sunlight stood the furniture, a mahogany high boy, a low boy, a bureau, and two mahogany tables; one a work table with drop leaves. They stood for inspection, a row of veterans, showing scars of many years of faithful usage and now to be sold and scattered. The auctioneer was selling various humble articles, pails, tinware etc. including house things the use of which is now obsolete; a tin kitchen hatchel, wool and flax carders, a hand press, bellows, etc.

On the whole it was a pathetic sight; one that brought many thoughts to mind of the stories the old house and its contents might tell of an earlier and more primitive life in a new country. Austin climbed on top of the chest of drawers on which the auctioneer placed several articles. ‘How much do I get for this collateral, all except the boy?’ I took four pictures of the scene at different standpoints.

Inside the house people were sitting, talking in low tones and one could not help thinking it was a funeral. On the dining table was displayed the crockery and china ware and men were bringing up from the cellar a lot of preserved fruit, boiled cider, etc. How little Mrs. Merrill thought of this disposition of her labor when she put them up. In another room were the feather beds and bedding. We took the children into the garret, which was unfinished except a room at one end. The lots so far brought small sums, 5, 10 and 15 cents but the china brought more, a blue platter 1.75, etc. Mary bought an iron pan for 15 cents and I two old blue plates, both cracked, for .15 which the auctioneer knocked down to ‘that good looking man.’ I blushed. The highboy brought $16.00, the bureau $14.00, the work table which I bid 3.00 brought 6.00.

Many articles, including the sewing machine (5.00) were bought by Mr. Jewett who has bought a farm, He is a stal-wart, good natured looking giant of 35 years, 6 ft 6 inches tall. The auctioneer joked him a good deal about getting himself a wife now that he has a farm. It was a lively scene, the people and the teams in the bright sunlight, under the blue sky.”