A conductor checks to see if passengers are wearing required masks in Seattle, in 1918. An open-air barber shop. Public events were encouraged to be held outdoors to hinder the spread of the disease during the influenza epidemic. The University of California, Berkeley, in 1919.

“Between 1918 and 1919, an outbreak of influenza spread rapidly across the world, and killed more than 50 million—and possibly as many as 100 million—people within 15 months. The speed of the pandemic was shocking; the numbers of dead bodies overwhelmed hospitals and cemeteries. Quarantine centers, emergency hospitals, public use of gauze masks, and awareness campaigns were all undertaken swiftly to halt the spread. But as World War I was coming to a close, millions of soldiers were still traveling across the globe, aiding the spread of the disease. While its exact origins are still debated, it’s understood that the “Spanish Flu” did not come from Spain. The name seems to have arisen as reporting about influenza cases was censored in war-affected countries, but Spain was neutral, so frequent stories appeared about the deadly flu in Spain…the battle against one of the deadliest events in human history, when the flu killed up to 6 percent of the Earth’s population in just over a year. The Atlantic. April 10, 2018 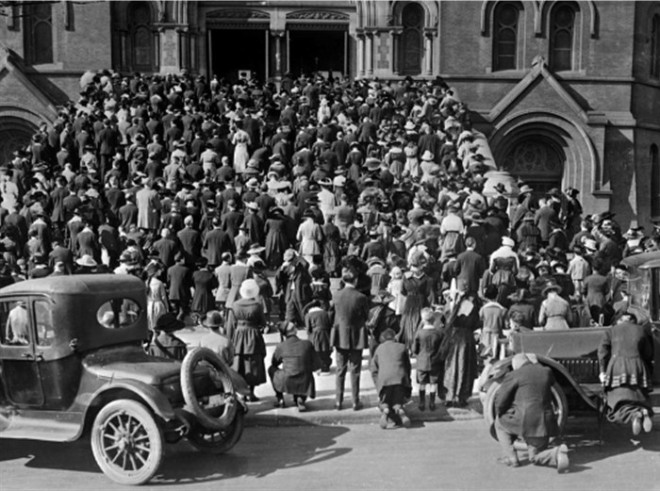 The congregation prays on the steps of the Cathedral of Saint Mary of the Assumption, where they gathered to attend mass and pray during the influenza epidemic, in San Francisco, California

“The strain was not only virulent and lethal but extraordinarily violent. It presented a suite of symptoms rarely seen with influenza—symptoms so unusual it was sometimes misdiagnosed as dengue, cholera, or typhoid. Patients exhibited a range of complications including hemorrhage from mucous membranes in the nose, stomach, and intestine. Flu sufferers sometimes bled from their ears and eyes, or even right through unbroken skin…And the 1918 flu targeted young adults. Those between ages 20-40 accounted for most of all deaths. The over 50 age group was far less affected. Perhaps more disturbing is the fact that the actual flu disease was not responsible for the majority of deaths associated with the influenza in 1918-19, it was secondary bacterial pneumonia so nasty pathologists conducting autopsies found the lungs in such a devastated condition the only thing they could compare it to was victims of poison gas. Military doctors called it “atypical pneumonia” back then. Today it’s referred to as Acute Respiratory Distress Syndrome (ARDS). The Army’s board judged that ‘more than half” of all the deaths among soldiers came from this atypical pneumonia.”

University of Montana, Missoula, 1919. During the influenza epidemic, classes were held outdoors. Influenza patients getting sunlight at the Camp Brooks emergency open-air hospital in Boston. Medical staff were not supposed to remove their masks. Photos from the (National Archives)

“Intense and protracted prostration led to hysteria, melancholia, and insanity with suicidal intent,” reported New York City Health Department’s chief pathologist on patients bedridden for so long if the disease didn’t kill them they were often driven mad with depression. https://buckrail.com/covid-nothing-new

“Putting infected patients out in the sun may have helped because it inactivates the influenza virus. It also kills bacteria that cause lung and other infections in hospitals. During the First World War, military surgeons routinely used sunlight to heal infected wounds. They knew it was a disinfectant. What they didn’t know is that one advantage of placing patients outside in the sun is they can synthesize vitamin D in their skin if sunlight is strong enough. This was not discovered until the 1920s. Low vitamin D levels are now linked to respiratory infections and may increase susceptibility to influenza. Also, our body’s biological rhythms appear to influence how we resist infections. New research suggests they can alter our inflammatory response to the flu virus. As with vitamin D, at the time of the 1918 pandemic, the important part played by sunlight in synchronizing these rhythms was not known. Doctors who had first-hand experience of open-air therapy at the hospital in Boston were convinced the regimen was effective. It was adopted elsewhere. If one report is correct, it reduced deaths among hospital patients from 40 per cent to about 13 per cent. According to the Surgeon General of the Massachusetts State Guard.” https://medium.com/@ra.hobday/coronavirus-and-the-sun-a-lesson-from-the-1918-influenza-pandemic-509151dc8065

Today’s Covid-19 or SARS-CoV-2 or whatever they’re calling it this week shares many of the attributes of past influenza outbreaks. Only time will tell if this time its different and to what degree. Hopefully, its not nearly as deadly.

California A Physics class, University of Montana, Missoula, 1919. During the influenza epidemic, classes were held outdoors.