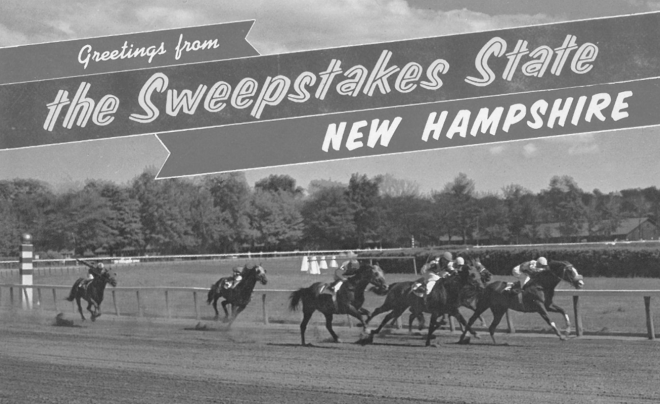 New Hampshire First in the Nation…Lottery.

Oh how far New Hampshire has fallen from it’s long held “Live Free or Die” roots. The story of the New Hampshire Sweepstakes is a fascinating journey into the workings of a state with no sales or income taxes, in need of revenue sources, and how it was seen by many politicians in Concord as a lesser evil to institute a lottery than introduce broad based tax measures.  And even if it meant going up against all of the power and regulatory power  of the federal government.

On April 30, 1964, Governor John W. King, a democrat, signed into law a bill making New Hampshire the first state in 70 years to sanction a sweepstakes.

According to the New Hampshire Lottery Commission: “State Representative Larry Pickett of Keene saw a sweepstakes as a viable and voluntary method of raising money for education. Between 1953 and 1963, Pickett proposed a Sweepstakes bill five times, finally succeeding in getting it passed in 1963. On April 30 of that year, Governor John King signed the bill.

There was opposition to the “Sweepstakes.” It was an interesting tight-rope walk since it was seen as fine for the state to sell booze, but gambling was somehow a moral menace. A February 28, 1964 editorial from the Derry News states, “Throughout New Hampshire the Committee of One Hundred has met with surprising support in its campaign to get a ‘no’ vote against the sweepstakes ballot question on Town Meeting day, March 10… Even Salem, with backing of the very top management at Rockingham race track, has organized a local committee to get out the ‘no’ vote for sweepstakes in that town. This is not surprising  for there are many, many people in New Hampshire who have a very uneasy-feeling about supporting a lottery scheme as a means of financing the cost of state government”

“Let it be understood that a vote against the sweepstakes in not a vote against the governor, nor the legislature, nor the law of the state. In fact, the legislators specifically made it mandatory that the voters have a chance to vote on the issue in every town in New Hampshire before the sweepstakes is finally accepted or rejected as a taxing scheme…We urge the people of Derry to vote against the sweepstakes on Town Meeting Day…The sweepstakes can’t begin to fill the gap. Let’s scrap this costly tax gimmick and put our minds to the business of coming up with an effective and more efficient tax program. Sooner or later we are going to have to face it. If the sweepstakes is killed in New Hampshire on balloting day March 10, the air will be cleared so that a sound taxing program can be developed. It cannot come until we lay this half-measure scheme to rest…” (Needless to say, this seems a very odd way to build support for a sweepstakes no vote…vote no so we can pass a sales or income tax, which the state still has not seen fit to pass.)

William Loeb, the publisher of the Manchester Union Lear backed the sweepstakes; we assume because of his opposition to broad based taxes. “And now the publisher of the Manchester Union Leader isn’t so sure that he has completely sold the majority of the people in the state, despite his repeated statements that an overwhelming number of people support the sweeps. In an impassioned front page editorial last week, the out-of-state publisher strongly urged those in favor of the sweeps to get out and vote.”

Again from the Derry News, “Delores Bridges Joins Bass In Denouncing Sweepstakes. Effective opposition to the New Hampshire Sweepstakes went into high gear this week with the mailing of 20,000 copies of a four page broadside that brought the names of additional citizens to public attention. ‘Considered’ the official publication of the Committee of One Hundred that seeks repeal of the sweepstakes, took to newspaper tabloid form this week with page one headlines that highlighted the opposition of Mrs. Styles Bridges, widow of the former United States Senator, and former congressman Perkins Bass of Peterborough. Mrs. Bridges is quoted from a newspaper interview in Manchester two weeks ago in which she cited the sweepstakes as further evidence of the ‘moral decay’ of our society. She says in the interview that there is no evidence to convince her that the majority of New Hampshire residents approve the sweepstakes… The publication draws heavily on a recent study conducted in Nevada that shows the impact of legalized gambling has made in that state. Officials of the Committee of One Hundred cite the high incidence of crime—in Nevada and insist this can be an expected end for New Hampshire if the sweepstakes be approved at the March 10th primary.”

“Mrs. Rodney Ellis chairman of the Education Committee of the New Hampshire Farm Bureau released the following statement…Enactment of a Sweepstakes Lottery as a means of financing education is as stupid as it is inconsistent…Present state income used for education is derived from such uncertain sources as tobacco and liquor sales and racing. Adding a sweepstakes only increases its unreliability…vote no on the referendum March 10, 1964. Then we can settle on a sound, equitable tax as a firm foundation for present and future education in New Hampshire.”

“New Hampshire cities and towns voted by special ballot, with 198 of the state’s 211 communities voting in favor of starting a lottery. On March 12, 1964, two days after the vote, Sweepstakes tickets went on sale – and the benefits to New Hampshire schools began.”