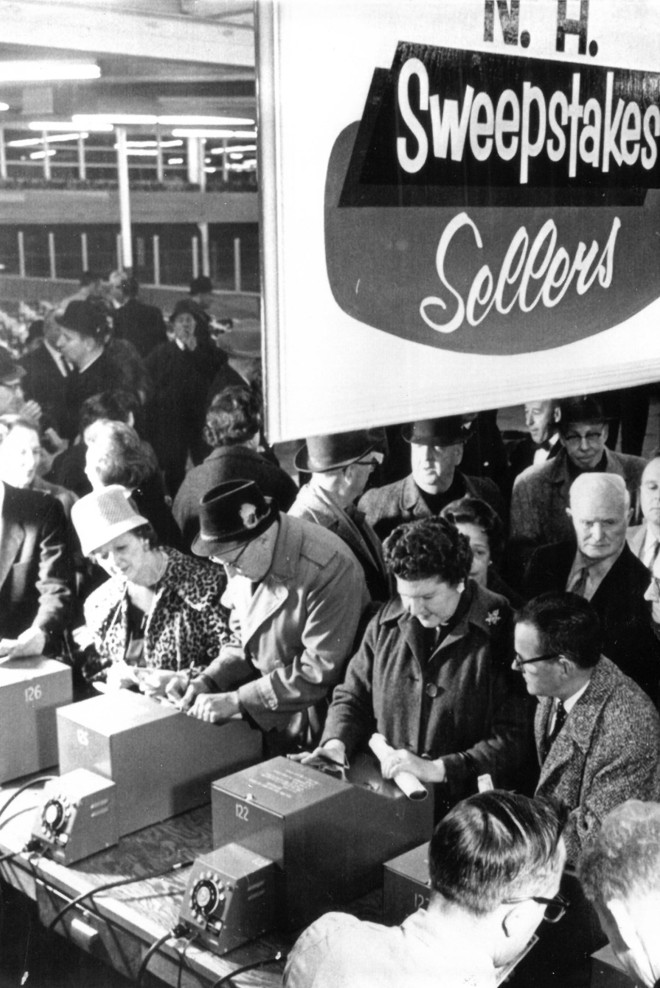 New Hampshire Sweepstakes – How the Game was Played

“Sweeps tickets went on sale March 12, 1964, at Rockingham Park. In a ceremony of much fanfare, Ed Powers sold the first $3 ticket to Governor King: #0000001. He held the slip high — the first legally purchased lottery ticket in the modern age — and the gathered crowd exploded into cheers. Then the rest of the sales windows opened and a crush of dreamers kept clerks working until one hour after the track was supposed to close.”

“The major obstacles to a sweepstakes were federal rules prohibiting lottery material from the mail and laws against transporting gambling paraphernalia (like tickets) across state lines. Also, the Justice Department had publicly announced its fear a lottery would attract racketeers who would infiltrate and corrupt the operation. In secret meetings with the DOJ, King’s staff determined operating a lottery within New Hampshire would be permissible. But the FBI would take action if tickets crossed the border — an inevitability nearly impossible to prevent (and greatly encouraged).”

How did Powers and the state of New Hampshire get around the obstacle of federal restrictions? Easy! The Sweepstakes created a loophole by providing a carbon copy of the ticket to the people who bought them. The actual ticket remained in New Hampshire so never ran afoul of federal laws against crossing state lines. This opened the way for people from New Jersey, New York and Massachusetts to purchase tickets without breaking federal laws. The Sweeps were genius in another way. They promoted tourism in New Hampshire. Since the ticket had to be physically purchased in New Hampshire, people often planned a vacation around purchasing a Sweeps ticket.

So how did it work? Sweepstakes tickets were drawn from a giant drum. The winners then were matched with horses that ran in the Sweepstakes race at Rockingham Park. “In July, a pair of beauty queens pulled names from a rotating 2,400-pound Plexiglas drum and matched each one with one of the 332 horses hoping for a position in the race. For every $1 million in tickets sold, another batch of players and stallions would be drawn. In the end, there were six people whose fortunes rode on each horse. Among those selected to win prizes both large and small were an 8-year-old boy, a recently deceased immigrant, an office pool from New England Telephone and someone who signed the slip ‘Old Man Sunshine.’ ” So the six ticket holders who were matched with the winning horse, each won $100,000.

If you are interested in the subject there is a great book titled, “American Sweepstakes” by Kevin Flynn. It tells the story of “how one small state bucked the church, the feds, and the mob to usher in the lottery age.”