The Bea’s on Route 110 in Methuen, Atomic Subs in Salem

Maybe its because I’m writing this at lunchtime and I haven’t eaten, I don’t know, but I’ve been overcome by a wave of nostalgia for the foodie heaven of my childhood. I know this isn’t exactly “Windham History” but if you lived in this town in the fifties, sixties and seventies you were familiar with these iconic road-side places.

Atomic Submarine was located on Route 28, in Salem, where the Burger King is today. According to blog.retroplanet.com they opened on 1965 and remained at the same location until 1984. The shop opened in the former VW dealership. The reason this place is so important to me, is not because of the food. You see, right next door there was a slot car place, where my brother and I used to hang out for hours on end.  One Saturday, we had our cars on the track as usual, when some kid came in yelling, “The Rolling Stones are next door at Atomic Subs.” And it was true. As I remember it, they were driving a van behind which they were pulling a trailer with their equipment. I confirmed this memory with my brother who was four years older at the time and for whom a Rolling Stones sighting was much more an impressive event. I remember eating the subs there. According to blog.retroplanet.com they offered a sub called the “Atlas” that was three feet long. Bill Littlewood and his wife Marge eventually owned 20 stores in the area and there was talk of going national but it soon all came to an end because of a dishonest book-keeper or so the story goes.

When I think back on the cutlet sandwiches that we used to get at Bea’s, my mouth begins to water. You remember how the huge cutlet, hung 3 inches beyond the roll. Legend has it that the family started making sandwiches from their tenement kitchen in Lawrence. I remember the Lawrence store on Broadway very well. The inside was gleaming stainless steel and mirrors. When I was a kid, I was totally intrigued by the mirrors, because they were  huge and on opposite walls, so they produced an unique optical illusion, with me descending into infinity and beyond. My grandfather, in the midst of a heart attack, asked to stop and get a Bea’s cutlet sandwich before they took him to the hospital. They were really that good!!!

With the new Ray Kroc, “McDonalds” movie hitting theaters, it is appropriate to remember that New England’s first fast food restaurant was Howdy Beef Burgers. The one in Salem looked just like the one pictured. The chain was started by William Rosenberg, who also owned the Dunkin Donuts chain. They were hugely popular, probably because they were fast and cheap, unlike today. And the fries were really great, also unlike today, when all fast food fries pretty much suck. You could get a burger, incredible fries and a coke for just 37 cents. 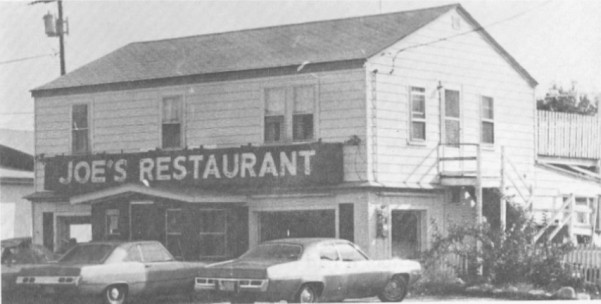 Of course, before Howdy Beef Burger there was the A&W Root Beer on Route 28, where they took your order and hung the tray on the side of your car.  There was also “Joes” which had great food and was always packed. As a kid, I remember waiting in line to get into that place!  I went for the red Jello and whipped cream which I was allowed to have if I ate my meal. And who could forget Findeisen’s ice cream stand. Chocolate marshmallow ice cream, under the willow trees by the Spicket River.  I really need to go and eat lunch… but I’m just now remembering the nice older Italian lady who used to serve me incredibly delicious meatball subs after high school, at “Gateside,” across from Canobie Lake Park…OK, OK, I’m off to lunch!!!