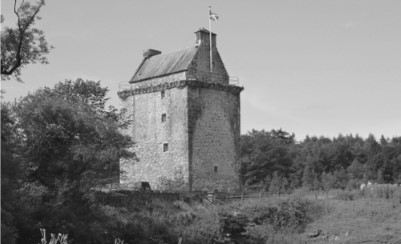 Pictured above is Gilnockie Tower, located 2.3 miles north of Canonbie Scotland, built by Johnnie Armstrong, around 1520. The Lochinvar, made his escape through Cannobie in Sir Walter Scott’s poem

Part 1: My Apologies to Leonard Morrison

I’ve written about how the name “Canobie” Lake came to be, several times in this column, and I’ve always assumed the Leonard Morrison made a mistake with the spelling. In fact, this town in the borders lands of Scotland is now known as Canonbie, however, I’ve recently discovered that this was not always the case. I found an old postcard on which it said that the view was of Canobie, Scotland. This prompted me to do some research to see if there was more than one “Canobie.” This is what I discovered:

Canonbie is a small village in Dumfriesshire within the District Council Region of Dumfries and Galloway in south west Scotland, six miles south of Langholm and two miles north of the Anglo-Scottish border. It is on the A7 road from Carlisle to Edinburgh, and the River Esk flows through it. There are frequent references in older documents to it as Canobie. (Miller, Hugh (1871). Leading Articles on Various Subjects. p. 245.) So there it is, our beloved and accurate, Windham historian, Leonard Morrison, did not make a mistake. Canonbie was known as Canobie in the 19th century, when, the Boston & Maine Railway station was built and Policy Pond was renamed. So Mr. Morrison, I apologize for not trusting in you.

Canonbie Parish had an Austin (Augustinian) priory at Hallgreen, dating back to about 1165. The priory was destroyed during the reign of Henry VIII after the Battle of Solway Moss in 1542. A grassy mound in a field near the present day church is believed to be the only remnant of the ruins. “The priory is important in that it is the source of the name Canobie. CANOBIE, or CANONBIE, a parish, in the county of Dumfries. An ancient priory here is supposed to have given the name to this place, Canobie being probably derived from the Saxon Bie, or By, signifying “a station,” and thus interpreting the word “the residence of the canons.”

Remains of a Roman signal station can be found on rising ground near the old Gilnockie station; and ruins of famous mediaeval strongholds are at Hollows and Harelaw; remains of other mediaeval strengths are at Mumbyhirst, Auchenrivock, Hallgreen, Woodhouselees, and Stark.

Over the coming weeks, you’ll know the whole story of Canobie. You’ll hear how this town on the Scottish borders was immortalized in a poem by Sir Walter Scott, “There was racing and chasing on Cannobie Lee,” and you’ll learn about the exploits of Johnnie Armstrong, the laird of Gilnockie. There really is much more to the name Canobie, than you’ve ever imagined and is it a very appropriate name for the beautiful lake shared by Windham and Salem.

The Canonbie church was built around 1820, near the site of the original priory from which Canonbie took its name.