The Mackenzie Property and the Boy Scout Log Cabin

WINDHAM, July 6.— “Howard Upham, boy scout of Troop 36 of Dorchester, Mass., tells in Boys’ Life, the Boy Scout’s Magazine, the story of ‘How I Built My Log Cabin,’ and there is a cute little picture of this cute little cabin with its stone chimney, which stands at the rear of the Upham cottage on Cobbett’s. Howard claims the entire cost, not counting labor, was under fifteen dollars.”
After reading this, I remembered that my grandparents, Lorimer and Della Mackenzie had purchased land on North Shore Road, on Cobbett’s Pond, from the Uphams. My great-father owned the lot next door. At some point, prior to the purchase of the land, the Upham cottage had burned to the ground. I always remember talk of the log cabin that was on the property, which my grandparents used for several years before they built their summer cottage. The property is now owned by my aunt and uncle Phil and Beverly Meuse. 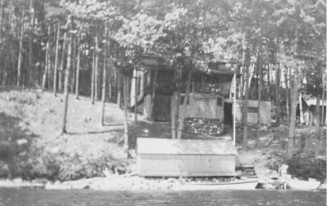 Upham’s Cottage Before in Burned on North Shore Road

Well it appears that the log cabin was Howard Upham’s Boy Scout project. At the time, scouts were building log cabins all over the country. The piece in Boy’s Life reads: “It was my desire, in the first place to build a log cabin which would accommodate two or more fellows. Having carefully figured out the size desired, I cleared a piece of ground twelve by fourteen feet, located near the shore of a lake. Dead pines and oaks standing in the nearby woods afforded the necessary material for the cabin. I began building the cabin so late in the summer, and so near school time, that I got only as far as laying the foundation, which was of oak timber. I selected an oak foundation for the reason of greater durability.”

“The pine logs for the walls of the cabin were hauled during the winter months, when the snow was on the ground. They were cut into fourteen foot lengths, averaging six inches in diameter, and then notched near the ends, so they would fit snugly into each other. The gathering and notching of the logs and fitting up the side walls I did that winter. The following spring the roof was put on. This was done by nailing boards over the logs of the roof, and then tacking over the boards a good grade of roofing paper. “
“Then came the building of the fireplace, which consisted of rough field stone. It took some time to get the stones properly fitted and cemented into place, but finally, after a week of masonry work, a good chimney and large fireplace were completed. A mixture of Portland cement and coarse sand were used to fill up the cracks between the logs. I figured that cement made a better substitute than the moss that is commonly used. Last of all the windows and door were carefully fitted in, while inside a floor of pine boards was laid upon oak timbers… The total expense for building the entire cabin came under fifteen dollars.”