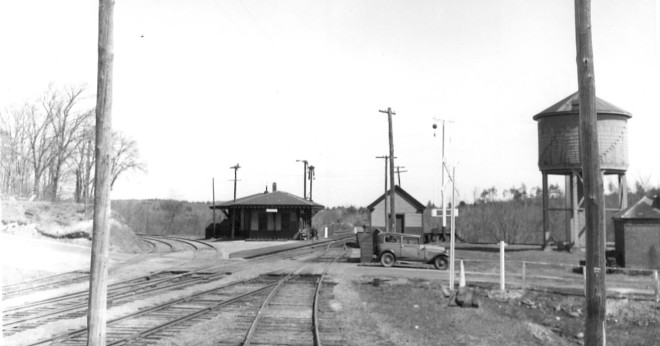 The Boston and Maine Railroad Station at Windham Junction circa 1930

There was a time in New Hampshire, in the late 1800’s, when the state government was controlled and did the bidding of the Boston and Maine Railroad. They picked the candidates and dictated many of the important decisions. By 1930, when this photograph was taken, the glory days of the B & M Railroad were long over. Describing the “Depot” about that time, Richard Hoisington says in the B&M Bulletin that, “In 1927, the general store and its attached buildings were destroyed in a spectacular fire that threatened other buildings in the junction area. After the fire, Postmaster Clyde began selling groceries and before long he installed gasoline pumps as well. Although his store inventory was limited, it is said that ‘if he didn’t stock it, he could get it for you.’ Clyde was postmaster until 1945 when the store was closed and eventually torn down in 1965. Effective September 14, 1935, the Windham station agency was closed and the sale of tickets discontinued. The few passengers who wished to entrain at Windham could buy their tickets from the conductor. Passenger service on the Manchester and Lawrence Branch was reduced to a single round trip daily prior to World War II. Weekday trains consisted of a gas-electric car and a trailer.  A K-7 Consolidation powered Sunday trains. The last scheduled passenger train, NO. 1511, consisting of gas-electric No. 182, was operated July 10, 1953 by conductor Harold Leavitt, Engineer John Bryant and Baggageman, Bernard Walls.”