Windham and the Summit 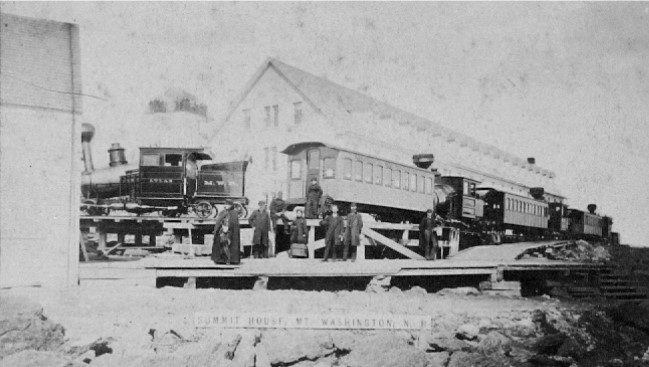 The “Old” Summit House that Mattie Clark from Windham, managed for many years.

Can you imagine a time when visitors could take the Cog Railway to the summit of Mount Washington, take in all the spectacular scenery and most extreme weather conditions, and enjoy it all while staying in well appointed accommodations there. Such was the world of the Summit House, a popular hotel that graced the summit of Mount Washington from 1873 until it was destroyed by fire in 1908.

For many years, a Windham native, was at the very center of this enterprise and was the popular manager of this well loved landmark. Miss Mattie Clark began working at the Summit House starting in 1884. Prior to that she had worked for the Profile House. When the hotel was destroyed the proprietors began providing accommodations in the rustic, stone, Tip-Top House, with Mattie Clark as manager. Finally, when the New Summit House was built in 1915 she again was put in charge. In the winter, she was employed by the Ormond Hotel in Florida, whose owner credited her with much of its success.

Miss Clark was a remarkable woman for the time; independent, and highly skilled, who died with a very sizable estate.  William Harris in the Exeter Newsletter of August 25, 1899 says, “Miss Mattie A. Clark of this town holds the responsible position of manager and housekeeper of the Summit House on Mount Washington. Among the Clouds thus speaks of her in a recent issue: ‘Miss Mattie A. Clark, who first became connected with the Summit House in 1884, and who has so successfully managed if for several years past, is the manager this year, and that is saying quite enough to assure the Summit visitors of first class treatment. Both here and in Ormand Florida, where she is superintending housekeeper, Miss Clark has made the most enviable reputation, and is known as one of the most capable woman hotel managers in the country.’ ”

My interest in Mattie Clark and Mount Washington was rekindled by Tim Lewis, who has done a remarkable job chronicling the exploits of the men and woman who worked on the Cog Railway, and on and around Mount Washington. He is doing additional research and he recently wrote me because he is looking for a photograph of Mattie Clark, so that he can put a face to the well known name. Much of what is presented here came from his incredibly in depth research.

“Putting a hotel on top of Mount Washington was no easy task. A casual observer would speak of  the Summit House as a three story wooden structure, with accommodations for one hundred and fifty guests. Were he of  an inquiring disposition he would learn that it is built in the most substantial manner possible, of  huge timbers bound by iron bolts, enabling it to withstand the fiercest storms of  winter, that the main building cost $56,599.57, not including freightage; that the lumber and materials, 250 train loads, used in its construction weighed 596 tons; that the thirty-three carpenters employed upon it, handicapped by storms, erected the frame and accomplished its ‘boarding in’ only after many delays – at one time able to work but one-half  day during a storm which lasted nine; that it was first opened to the public in 1873, and numerous other facts of  greater or lesser interest. It is said that transportation facilities are such that 10,000,000 people could breakfast at home and reach the White Mountains before retiring. To you one and all the Among the Clouds sends greetings, urging you to visit Mount Washington and learn for yourselves just what enthusiasm that writer felt who told of  a ‘warmest welcome in an inn.’ ”

Martha A. “Mattie” Clark was the middle child of  three born February 11, 1852 to Joseph S. and Deborah Armstrong Clark in Windham, New Hampshire. Mattie’s parents were Joseph-Scoby Clark and Deborah Elizabeth Armstrong the daughter of Joseph Armstrong. They lived on the Archibald farm in Windham. Mattie’s only sibling who lived to adulthood was a brother, Burnham who was born October 16, 1849 and who died fighting in the Civil War,  March 22, 1865.

Hopefully someone who reads this may have a photograph of Mattie Clark for Tim Lewis.