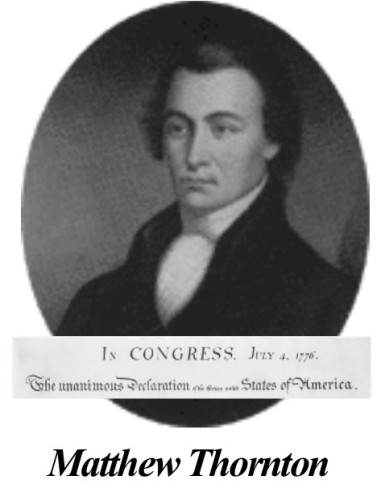 The following account of Matthew Thornton (1714-1803) and the Declaration of Independence is taken from a speech given in 1869, at the 200th Anniversary Celebration of Nutfield given by his descendant Gordon Woodbury. “For allow me to say, friends, that in coming to Londonderry (for I decline to call this Derry), in coming to Londonderry, I for one feel as though I was coming home, for the chairman of the day has alluded to Matthew Thornton as an ancestor of mine but has omitted to state that I claim descent from the Nesmiths, Morrisons, McGregors and Bells; but from the fact that the chairman wrote me in his invitation that I was expected to speak no more than fifteen minutes, and if possible a leading to mercy, I will only point out some facts connected with this Matthew Thornton who so deeply marked his impression upon his times and who was your fellow townsman.”

“He was born in Ireland in 1714 and came here with his father and mother in 1718, went to Worcester and staid a short time and then moved to Derry. His grandson, my grandfather, remembered him, although at the time of Matthew Thornton’s death his grandson was but four years old, and I can recall being told what the man looked like—tall, thin, big black eyes, a great joker. That was the impression which his grandson bore away from your distinguished townsman; and distinguished he was, or rather distinguished you were by reason of what he did, differing from that done by any other man who signed the famous Declaration of Independence, he did a deed which we Londonderry people will love to believe was characteristic of the people who sent him to Philadelphia.”

“The Declaration of Independence was voted on the third of July, 1776, and when the resolution approving it had been passed the declaration was signed by the president of the convention and its secretary John Hancock, and Robert Thompson, and only those two. It was not signed by the other delegates present. It was proclaimed on the fourth of July, and when proclaimed did not bear the signatures of any of the delegates save the two I have named. Couriers were sent from Philadelphia to the provincial capitals whose representatives were present, conveying copies of the declaration and a request for the chairman of the Continental Congress that the declaration be made public within the limits of the various provinces. The Continental Congress of New Hampshire, that is the provincial, adjourned on the sixth of July to meet on the twelfth of September. The courier bearing the declaration reached Exeter the twelfth of July and the declaration was read at that time. Within the latter part of the month of July and early August, 1776 most of the other delegates of the Continental Congress signed the declaration, but not all of them. Some of the delegates from New York did not, some of the delegates from Virginia did not, one from Rhode Island did not, and one from another colony (I have forgotten which) did not, for they were absent on leave from the sitting of the convention. They returned, however, and signed the declaration upon their return and it lacked the signature of only one man, a Mr. McKernan from Delaware, who was absent with the army.”

“The Colony of New Hampshire had chosen three delegates to go— John Langdon, Governor Bartlett’s ancestor, and William Whipple. These men had been in attendance at Philadelphia through the spring and early summer of 1776, but John Langdon, desiring to be made prize-master, had found that it was necessary for him to resign from his seat in the Continental Congress, because even at this early date out fathers were very desirous as now, that no member of the House or Senate should hold an office of profit other than a seat under the government, and it was necessary for John Langdon to resign his seat if he wished to be appointed commissioner of prizes at Portsmouth. He chose to be so appointed and resigned his seat.”

“When the provincial congress of New Hampshire met in September of ‘76 there was no one representing the colony at Philadelphia save Josiah Bartlett. He wrote his associates at Exeter to give him an associate. They chose Matthew Thornton to be a delegate and they chose him for one year. He was then a judge of the superior court and it was necessary for him to clean up his calendar before he left. He left the twenty-sixth of October 1776 and went by way of Poughkeepsie, going on horseback, and arrived at Philadelphia the third of November.”

“During the summer of ‘76 military affairs had gone very badly—revolting colonies, the disastrous battle of Long Island had been fought. Washington had retreated across Long Island, New York had been taken by the British, and the outlook for the success of the experiment was very gloomy.”

“In the hope of taking advantage of that moment of depression the British government published an amnesty, a royal proclamation, to the effect that full pardon would be granted to all those lately in rebellion except George Washington and all those men whose names happened to be signed to a certain treasonable declaration published in Philadelphia, July 4, 1776.”

“When your representative reached Philadelphia the third of November ‘76, and this amnesty declaration was in full force, the minutes of the convention show that on his motion the declaration was laid on the table and permission given him to sign it. The full significance of that fact I take it cannot be had without a little explanation. All the penalties of treason with all the horrible punishments which then attached to the convicted private were denounced against all those whose names were found on ‘a certain treasonable declaration published in Philadelphia,’ and the Scotch-Irishman from Londonderry hastened to improve the opportunity to add his name to it.”

(Benjamin Franklin made the point more tellingly when, as he was about to sign the Declaration, he remarked, We must, indeed, all hang together, or most assuredly we shall hang separately. In suggesting that hanging might be the fate of those who signed the Declaration, Franklin was choosing an easier end than the one traditionally meted out in England to traitors.  Traitors were subject to the ferocious and gruesome punishment of being hanged, drawn, and quartered, reflecting the ancient judgment that a single death was an inadequate response to the crime of plotting the king’s death or seeking to overturn the established order.)

Would you or I have signed the declaration? Would we have risked losing everything? Woodbury continued, “A people who take no pride in their remote ancestors will never achieve anything worthy of pride by their remote descendants.” An interesting sentiment for this July 4, 2019 celebration.