The grave stone in the Cemetery on the Hill in Windham, NH of Francis Richey, pirate.

Francis Richey’s grave-stone is located in the Cemetery on the Hill, nestled beside the row of Morrisons and Parks. It is indictive of the Scots-Irish character of, live and let live, and anti-authoritarianism, that allowed him to live quietly among his fellow brethren, undisturbed,  while pursuing his life of piracy.

“Francis Richey, born in ye County of Antrim, and town of Ballymanaugh, in ye north of Ireland, who died July 12, 1777, at 61 years. Such is the inscription upon the grave-stone of one whose life was shrouded in a mystery, and in regard to whom wild stories were told, and strange things surmised, more than a century ago. He lived with his sisters, Mrs. — Hamilton and Widow Thompson, at what is now the Samuel Bailey place, near the cemetery.” (The Bailey place was located on the corner of Range Road and Spear Hill Road. The current owners of the subdivided parcel might want to rent a metal detector to check for a buried chest.) The probability is that he and Thomas Richey were sons of Alexander, first mentioned, and that the children mentioned upon the records were by a later marriage, so I have designated them as such. (“Alexander Richey, bought of Robert McCurdy 75 acres southeast of Cobbett’s Pond, Feb. 10, 1736; consideration 60 pounds; subsequently bought other lands; was selectman in 1746.”)

“He (Francis) was a sea-faring man, and brought home quantities of gold to his sisters, and ‘new notes of the Bank of England.’ He brought silks and satins, and jewels and diamonds, which dazzled the eyes of  the humble worshippers in the church on the hill. Many furtive glances were cast at the dark eyed sailor, many wished to know the story of his strange life, and Moll Pitcher, the famous fortune-teller, used to excite the imaginations of the last generation by telling them the place where he had buried his treasures; to obtain them one must go alone, and at the dread hour of midnight, till she dared stay no longer; and she believed to her dying day, that had she had the courage, she could have found the gold. His money educated his niece, the accomplished and beautiful Margaret Hamilton. But whatever was the story of his life, it was not revealed, and its secret died with him. If his treasures were buried like Captain Kidd’s, so, like Captain Kidd’s treasures, they were never found. In the northern part of the ‘cemetery on the hill,’ in a grave over which is placed a wide stone, after the English fashion, the sailor rests till all mysteries are unfolded to our view, in the great awakening light of the final day.” 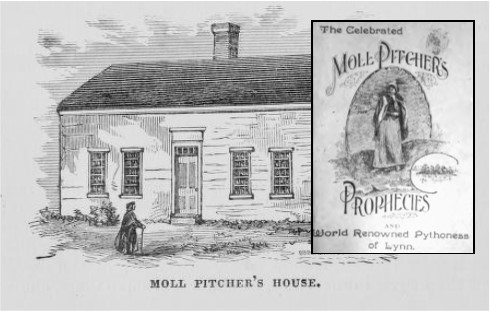 Moll Pitcher was born in 1738 and died in 1813. The legends that grew up around her were real, but were later embellished by Whittier. “Her grandfather, old Captain Dimond, was called the ‘Wizard of Marblehead,’ and it was said :  ‘Used to pace the cemetery at night conversing with ghosts and witches and his voice could be heard miles out at sea directing the course of vessels. The History of Lynn states that Mary “Moll” Pitcher was, “connected with some of the best families of Essex County, and with the exception of her extraordinary pretensions, there was nothing disreputable in her life or character. Not only was she consulted by the poor and ignorant, but by the rich and intelligent, by the accomplished and vulgar, the timid and the brave, the simple rustic from New Hampshire and the nobleman of Europe. The predictions concerned love affairs, legacies, discovery of crime, successful lottery tickets, and the more common contingencies of life. These were the subjects of her staple productions; but the most important visitors came from those interested in various ways in the commerce of the region. The sailor before the mast, and cabin-boy, as well as the ship owner, resorted to her humble abode under High Rock, to ascertain the results of a voyage…”

“Treasure seekers, who were numerous in her time, frequently sought her assistance in locating stores of hidden treasure along our coast. It is said she had neither sympathy nor patience with them, and would reply to them sharply, ‘Fools, if I knew where money was buried, do you think I would part with the secret?…In discovering the secrets of the future, Mrs. Pitcher used tea. When steeped she turned it into a cup, unstrained. The peculiarities of the position assumed by the particles of the tea in the bottom of the cup decided the fate of the inquirer…”The Essex Antiquarian Volume 3. John Greenleaf Whittier in his poem describing Pitcher is what turned her into the “Renowned Pythoness of Lynn.”