Haying on the Johnson Farm in Windham NH

Windham, August 10: Some farmers claim to have finished their haying, but how that feat was accomplished remains a mystery.” W.S.H.

Haying on the Wilson Farm on the Windham/Derry Line

“…He spoke of the grass and flowers and trees,
Of the singing birds and the humming bees;
Then talked of the haying, and wondered whether
The cloud in the west would bring foul weather…”
From “Maud Muller” John Greenleaf Whittier

Haying on the Markewich Farm in West Windham

“Yes, long shadows go out
from the bales; and yes, the soul
must part from the body:
what else could it do?
The men sprawl near the baler,
too tired to leave the field.
They talk and smoke,
and the tips of their cigarettes
blaze like small roses
in the night air…”
(It arrived and settled among them before they were aware.)
The moon comes
to count the bales,
and the dispossessed–
Whip-poor-will, Whip-poor-will
–sings from the dusty stubble.
These things happen.
the soul’s bliss
and suffering are bound together
like the grasses.
The last, sweet exhalations
of timothy and vetch
go out with the song of the bird;
the ravaged field
grows wet with dew.
“Twilight: After Haying” Jane Kenyon 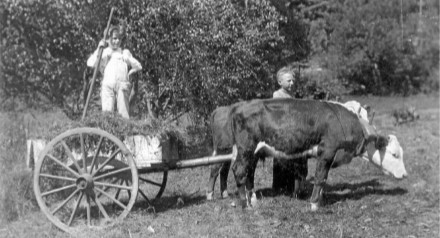